We are exited to announce Levante Fishing Charters has teamed up with Captain Chris Miles (Sharky) from Marlin 4 Miles!

Sharky has joined our team this year, sharing his expertise, at the helm of Levante operating our shared and private reef fishing charters out of Port Douglas. Sharky and his Marlin 4 Miles team will conduct their 2016 marlin season on board Levante (as per the previous 2 years).

Captain Chris  Miles has had a passion for fishing from an early age, graduating from land-based to boats, taking to the water every spare chance, in all types of vessels.

By the age of 16, Sharky had taken the opportunity to start his Marlin fishing career with Captain Frank Thompson as a crewman for 2 years in 93-94 for the Cairns Heavy Tackle Season and 95 crewed for Captain Dave Pemberton.

He continued to fish Cairns with Captain Bob Jones in the years to follow, 1996-2002,

In which during this time obtained his Ships master Class 5 at the age of 22 in 1999 and in 2008 Completed his MED II (Marine Engine Drivers) Certificate.

After the Cairns Season’s, Sharky would venture to South along the East Coast of Australia Fishing its hot spots throughout the remainder of the year including Tournaments and chasing world records on fly and ultra light tackle with Captain’s Paul Wheelan and Col Earl.

In 2002 Sharky accepted the offer from Captain Peter B Wright to crew in the Canary Islands, Dominican Republic and Bimini in the Bahamas, fishing for the giant Tuna in the “DUYFKEN”..

In 2007 Sharky was picked up by the Prestigious Company, Maritimo to promote their new Sportsfisher 550 for the Cairns Season which proved to be a successful venture for both parties.

In 2008 and 2009 Sharky Skippered the Mauna Kea placing in Townsville, Innisfail & Lizard Island Tournaments and winning the Port Hinchinbrook in 2008 and in 2009 placed again in Townsville, Port Hinchinbrook and won the Innisfail Tournament, also taking out the Lizard Island Black Marlin Classic for the third time. In 2010 Sharky is on The Seababy IV with his Crew Bevan & Daniel and looking forward to an action packed Season ahead.

Sharky has experienced some unforgettable fishing adventures and formed great friendships with Anglers, Captains and Crew from all over the World. He has worked his way up through the ranks to become well known for his fishing abilities and Consistencies, and with his Crew has great expectations of many more years to come.

We currently have dates available in August/September + November/December on both Zulu & Levante. Please contact us for more information. 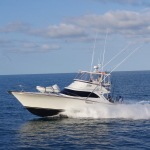 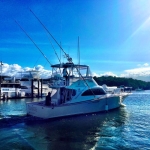 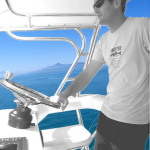 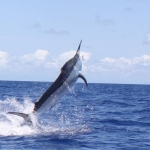