We are just returning from an eight-day mini expedition utilising vessels Zulu and Beluga. Collaborating with Northern Pictures Australia, we set out north for a diving trip to film footage for their upcoming documentary ‘BLUE’ (release date TBC). A team of film/production crew and talent, including the respected ‘Valerie Taylor’, ‘Madison Stewart’ (Shark Girl) and acclaimed freediver ‘Lucas Handley’. The expedition headed north out of Port Douglas to shoot specific footage in Lizard Island, the Cod Hole and traveling roughly 100NM out to Osprey Reef in the Coral Sea.  (The weather conditions were 25KNTS+)

This was our first trip in Australia utilising Beluga alongside one of our game boats (Zulu). We encountered rough sea conditions and overcast weather, which wasn’t ideal for scuba and free diving, However the team managed to pull together the shots they were after – including a shark feed at Osprey Reef.

It was an honour to have Valerie Taylor on board, who at 80 years old can still recall the majority of her dives and has numerous shark encounters to share. What a great experience to revisit and dive the infamous Cod Hole, which Valerie and her late husband Ron discovered back in 1971. (For more on Ron & Valerie Taylor – click here)

On the fishing front…

Zulu has been designed with diving in mind, however it’s no secret the team love to get the lines in the water so they managed to get in some fishing on the trip up and out at Osprey Reef. An hour or so bottom fishing on the way up north resulted in the trifecta of Red Emperor, Nannygai and Coral Trout. The 130lb heavy tackle gear was deployed outside the reef for an afternoon troll… 2-2-2 Black Marlin and a sailfish up to 150lb were successfully caught and released at the bottom of Ribbons Reef #5, which was great news considering we’re not in our ‘marlin season’.

Osprey Reef is a spectacular and isolated destination thriving with a mix of deep water fish, pelagic species and reef fish – The large reef surrounded lagoon ranges from 10 metres in depth to a shear drop off on the edge to over 1000 metres+, making it a sought after destination for scuba divers and fishermen alike. A shark feed dive followed by popping for GT’s (Giant Trevally) along the reef edges made for a memorable trip!

Stay tuned for information on the documentary release date and HOYTS cinema showings. 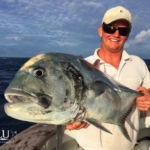 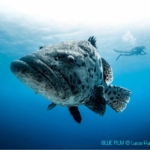 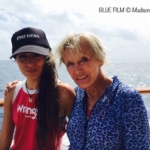 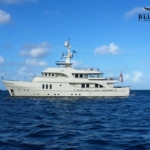 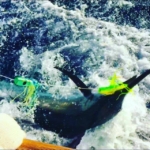 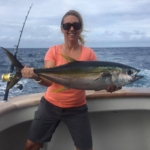 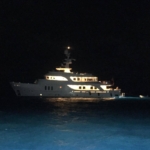 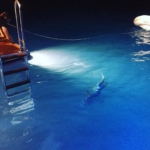 GT’s at back of boat in Lizard Island 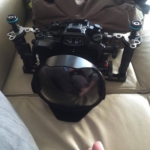 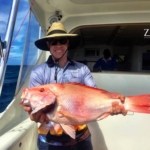 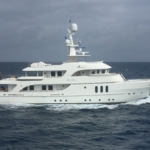 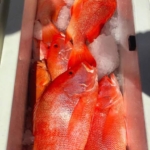 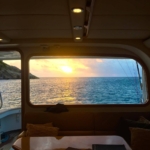 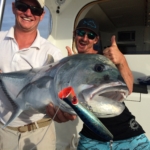 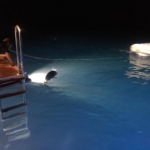 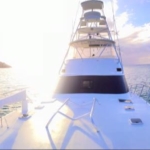