The black marlin are coming!

The black marlin are coming! 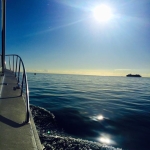 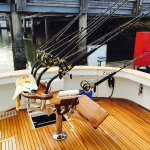 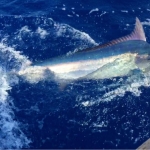 It’s that exciting time of year when the charter fleet is preparing for the influx of Black Marlin to the warm tropical water in Far North Queensland and the tackle is being dusted off and primed for action.

We’ve had Levante Fishing Charters out of the water at the The Reef Marina Slipway for her annual overhaul. Levante has now been leased and handed over to Captain Chris ‘Sharky’ Miles for the marlin season, whilst we concentrate on Zulu’s first heavy tackle season. How exciting!

On the fishing front, the weather of late has been unfavourable for hitting the water, However we did head out from Port Douglas with a few keen anglers on a day trip, who wanted to try their luck catching their first marlin, and on heavy tackle! Of course we were more than happy to pull out the big gear (heavy tackle) even if it hasn’t hit peak season yet! We headed out to Lindeman Bank, in search of any black marlin (or blue’s!) that may be feeding out on the edge.

Trolling lures and gar, we hooked up a nice 120lb black marlin in the first 20mins which resulted in cheers of joy and bulging eyes of awe at the site of the jumping fish. Surprisingly we didn’t see any tuna, dolphin fish or other typical pelagic species out there and there weren’t any significant shows of bait. We reverted to deep dropping and trolling for mackerel in closer to the reefs for the afternoon.

We have numerous fishing charters coming up in the next few weeks so stay tuned for more fishing reports!

Don’t forget we still have charter availability for marlin fishing between now and October as well as later in the season for heavy tackle! Don’t miss out, jump on board now!