Day one of our week long charter out of Cooktown proved to be the fisherman’s dream. Releasing a 200lb black marlin within the first hour of fishing at Ribbon Reef #10, followed by another a few hours later. At 4.30pm on the late afternoon tide change, the swimming queenie on the centre rigger snapped out of the clip and a giant shadow appeared from the depths. Our deckhand Michael (Mo) called for our main angler Tom to jump in the chair, knowing that he has been chasing this big girl for many years, However Tom graciously passed over the opportunity to his girlfriend Meagan who was excited for the fight ahead.

A few powerful jumps later and a better look at the fish, the guests called for the gaffs to come out, having chased marlin all over the world, this was the opportunity they had been waiting for and would cement their dream of officially weighing one of these giant fish. A forty-minute game of cat and mouse pursued with the big girl trucking along down deep and taking on the rising pressure of the drag. Captain Casey was on the throttles adjusting the boat to change the angle on the fish which proved successful and she succumbed to the pressure, rising to the surface, allowing deckhand Mo to stretch out his arms on the leader and take the fight to the next level.

We thought the fish was around the 900lb-950lb mark as she looked a little short and didn’t quite have that ‘grand’ appearance, however it was significantly larger than any previous fish our angler had caught and so off to the weigh station we went. Our mother-ship Beluga who is currently hosting two other game-boats on charter, allowed us to weigh it at sea with scales varying between 1005lb and 1011lb (between the motion of the/waves boat at sea, you normally take into account the lowest and highest recorded weight and find the average number to give you the most accurate figure).

A big congratulations to Meagan Goodwin on a great fight and a lifetime achievement. A thank you to the crew and guests on board Beluga as well as our own captain and and crew for turning another angler’s dream into a reality. 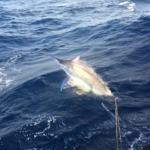 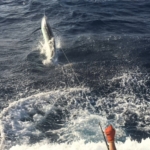 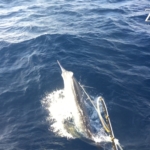 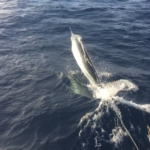 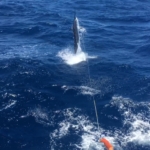