Just back from competing in the Telstra Cairns Bluewater Game Fishing Club – Fitzroy Billfish Tournament which was a light tackle marlin fishing tournament held out of Fitzroy Island in Far North Queensland. It was a chance for us to get out there and have some fun with our very own Amanda competing along with Steve from Dragon Lady Fishing Charters and his deckhand Lui. Great opportunity for us local ‘charter operators’ to switch positions and be the angler.

The line class was 10kg and there was a total of 48 boats competiting. Day one resulted in an early Black Marlin for Amanda followed by a couple of dropped fish. (They were juvenile marlin around the 5kg mark!) The next couple of days showed bait but a serious lack of marlin action within it. For full tournament results see the Black Marlin Blog here. Congraulations to Amokura for taking out the win, followed by Saltaire in second place. (All Port Douglas boats!)

Our season is ramping up with numerous upcoming charters. I aim to report updates here at least every fortnight, so join us here on the 2015 Cairns marlin season – virtually!

We still have a few dates available, so contact us for information if you want to get out there and catch your dream fish! 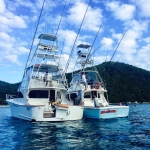 Raft up with Hellraiser II